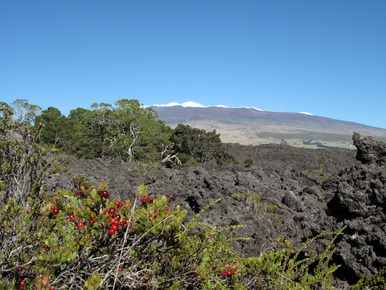 Model systems are needed to examine fragment area effects on food web structure where other factors are relatively constant. Human-induced fragmentation is typically associated with human activities, which may complicate interpretation of results from fragmentation studies. Forests on Hawai`i Island periodically experience a unique natural disturbance where lava flows into forests, leaving behind forest fragments of various sizes, which are called kīpuka. Located on the slope of Mauna Loa, we identified a system of kīpuka formed by two recent flows (1855 and 1886) creating a matrix similar investigative composition and stature. They represent a highly replicated gradient of forest ecosystem size distributed over a narrow elevation band confined to a single vegetation life zone (1500-1800m). These kīpuka occur within the State of Hawaii Forest Reserve System, an area subject to limited anthropogenic disturbance and whose flora and fauna are relatively simple and well-characterized. In summary, this series of more than 300 forest fragments of varying size is biotically simple, is surrounded by a stable and homogeneous matrix, and limits many confounding variables, making it a model system for research on food and pollination web dynamics, forest structure and productivity, and avian and plant biodiversity.