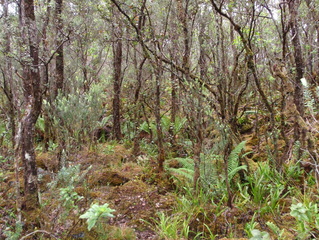 Interior shot of a kipuka/
Model systems are needed to examine fragment area effects on food web structure where other factors are relatively constant. Human-induced fragmentation is typically associated with human activities, which may complicate interpretation of results from fragmentation studies. Forests on Hawai`i Island periodically experience a unique natural disturbance where lava flows into forests, leaving behind forest fragments of various sizes,which are called kīpuka. Located on the slope of Mauna Loa, more than 300  of these kīpuka formed following lava flows in 1855 and 1886, which left 3000 to 5000 year old forest in a matrix of similar young lava dominated by rock and short statured vegetative that is fairly honogenous in composition and structure. These kipuka represent a highly replicated gradient of forest ecosystem size distributed over a narrow elevation band confined to a single vegetation life zone (1500-1800m). They occur within the State of Hawaii Forest Reserve System, an area subject to limited anthropogenic disturbance and whose flora and fauna are relatively simple and well-characterized. In summary, this series of forest  fragments is being used to study the effects of fragmentation without the confounding variables that plague previous fragmentation research. 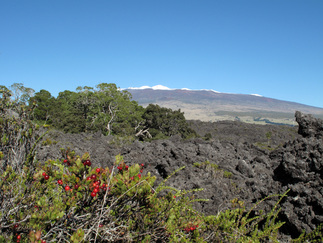 Looking north towards Mauna Kea mountain.
The Kīpuka Food Web Project, funded by the National Science Foundation in 2010, was initiated by faculty and research ecologists from Stanford University, Michigan Technological University, University of Maryland, the Carnegie Insititute of Science and the USDA Forest Service Institute of Pacific Islands Forestry. The goal of this project is to understand how the introduced predator, the Black Rat, and ecosystem size interact to influence food web structure in native Hawaiian forests. This study on 34 kīpuka of widely ranging sizes. To date, rats have been removed from half of these kipuka, and efforts are directed at monitoring the response of native arthropod and bird communities. Rats have been implicated in the decline of native species on islands around the world. Because rats are voracious omnivorous predators everything from seedlings and fruit to larger insects, bird eggs and chicks, we anticipate that Native species should respond positively to rat removal, with cascading effects into forest food webs. This project will have direct conservation relevance both locally in Hawaii and on other rat invaded islands.